A lot of innocent people became a victim of work-based or sexual exploitation in Western Europe. Human trafficking is the modern day slavery and affects more and more people – drew the attention to the problem by the Deputy State Secretary of EU and International issues of the Ministry of Interior, on Monday just before the „How much you worth?” conference organized about victim support and trafficking in Budapest.

Mátyás Hegyaljai from the Ministry, said prior to the conference organized by White Ring Hungary and Anonymous Road on the 10th European Day of fighting against human trafficking: it is totally incompatible with the essential interests of Hungary to exploit anyone against their will, thus becaming a victim.

The prosperity of Western Europe is attractive for many, so a lot of people try their luck there, but several of them became a victim of work-based and/or sexual exploitation for example in Belgium, Switzerland, or in the Netherlands – said by the deputy secretary of the state, who called the cooperation of international, state, and NGO victim support organizations an important element of fighting against trafficking.

The full article is available here – only in Hungarian.

Invitation to VSE annual GM
Comments are Off 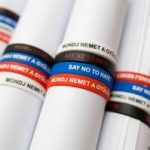